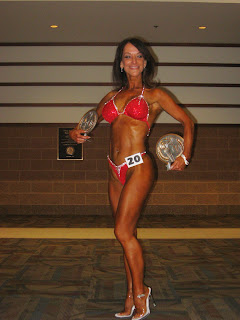 Yes, that picture is me, 3 weeks before my 50th Birthday!  Hard to believe that less than 6 months before, I was sitting in the first row of a Bodybuilding show as a spectator,  watching a friend that had only been working out for a year.  I had lifted weights for over 20 years, led a healthy life of clean eating, and done personal training for 8 years. I had a great job, a great marriage,and an awesome kid, but I realized that I had probably not challenged myself personally for around 15 years!! I needed something just for me!!

My old roommate turned 40, was sick of feeling fat, and fatigued, and often ill, so she hired a trainer, and entered a figure competition 9 months away.  I wasn’t sure if I doubted that she could actually follow the discipline that it took to get on the stage, or if I was battling my own emotions of why I couldn’t. I had toyed with the idea of competing in my 20’s, but didn’t want to commit to the diet. I went to my friends competition out of state, and as fate would have it, a competition trainer was there practically waiting for me.  I was from Michigan,  the competition was in Indiana, one of the judges was a mutual friends son….and he lived by me.  Well, realizing for the first time, that I was not born to spectate, I wanted to be on that stage by the end of the day!  Only if it were that easy!!!..

I came home and within 3 weeks, with the support and encouragement of my husband, met with my new trainer Mike, and got evaluated…….Right…..49 years old,  in a bikini, in the office of a high school gym, standing in front of a 23 year old bodybuilder asking if he thinks there is a chance that I could do well on the stage.  Yikes!!!  and then came the plan!

I am the “queen” of a plan….I live for a plan, so this was where it all began. Really training with a goal in mind, meaning gaining muscle, is SO different from just going to the gym and working out hard!  I am 5’1″ and started at 109 lbs…about 23% body fat, and considered myself strong in the gym!  Ha! I started training with my squats at about 55 lbs…by the end of the 4 months I was squatting 165lbs every 6 days!  Not to mention the weight I was pushing in all other areas, heavy weights, lots of rest, and mega calories, yes mega calories!!!  I had to ADD 1500 calories a day of CLEAN, LEAN protein, complex carbs, and NO cardio until 6 weeks before the show…..and ladies….do I look “too big”??!!!! 4 months later, I was in my first figure competition, I was the oldest (sheesh I hate that word) girl there, and I came home with 2 trophies!!  One for 5th place in the Masters division, out of 12 women, and another 5th place trophy in the open class, short, out of 13 girls of all ages!!!  I felt amazing!!!

Do you need to get on a stage?  Maybe not…….Do you need to feel empowered, in control of your life, your health, your body and your energy level?  HELL YES!!!  All women need to feel what I felt then, and what I feel now.  For easy tips on how to gain control of your body, burn fat for hours after a workout, and what clean eating REALLY is, stay tuned!  I want to help!

ps. As always, check with your doctor before starting a new exercise program.